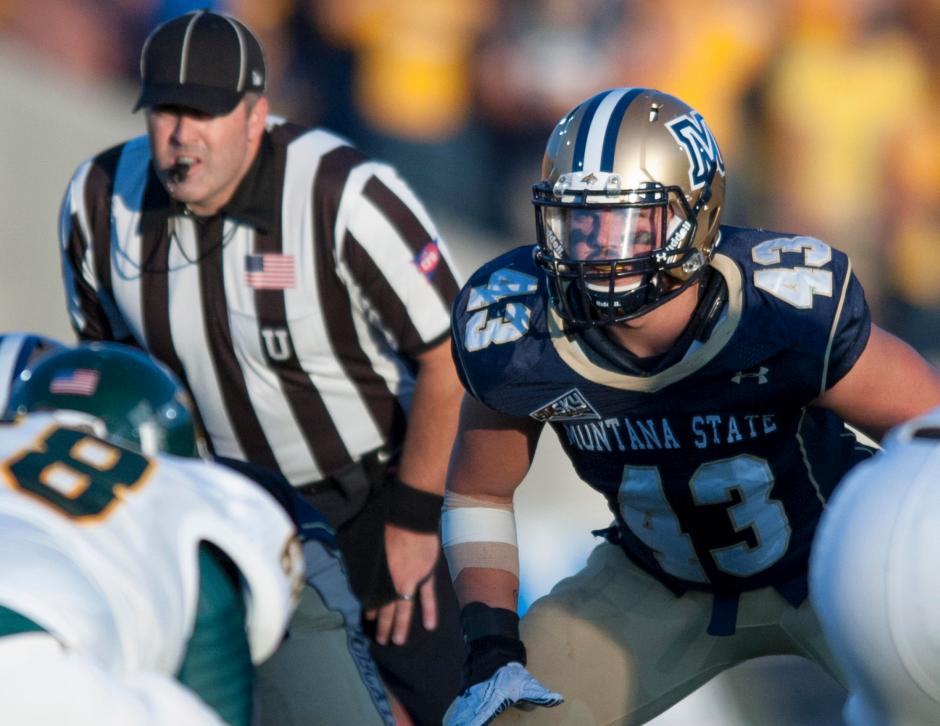 Canadian linebackers are, in some aspects, the heart of special-teams in 3-down football. They’re difficult to develop into starters on defense, but still offer tremendous value to clubs for their play on special-teams, an incredibly important aspect of Canadian football.

This years’s class boasts almost strictly players who project as special-teams players at most – which, evidently, is not necessarily a bad thing – except for a certain NFL-alum who tops our list of the top-10 linebackers in the 2016 CFL Draft class.

Singleton easily tops this list, as the former Seattle Seahawk and Minnesota Viking was already nearly CFL-bound as an international player before receiving his national status recently. Singleton is a pro-ready linebacker, with ideal size and experience in the professional ranks. He’s an athletic freak, and possesses incredible instincts and football I.Q. to go along with it. Amassing 136 tackles in his senior year, Singleton had incredible collegiate production. He’s a fluid player on tape, with sure-tackling abilities, awareness both in coverage and against the run, and aggressive, physical play at the point of attack. He works off blocks, forces cutbacks and is able to chase down ball-carriers. Singleton has a bright future in the CFL, and it could lead to more NFL opportunities down the road.

Having only spent one season as a linebacker after entering the collegiate ranks as a running back with both Arizona State and UBC, Davis is still quite raw. The mental part of the game, such as awareness and pursuit angles, will need developing, but the physical part of the game is there. Davis is quite athletic, and possesses good feet, hips and change of direction skills, and really put them to display in the combine one-on-ones in pass-coverage. He’ll be a project, but Davis has a lot of potential and has the physical traits to excel on special-teams.

Lalama, who participated in the New York Giants’ rookie mini-camp, has been an underrated linebacker prospect through the pre-draft process. Lalama possesses a great blend of size, aggression, instincts and reliable open-field tackling skills to project well as both a MIKE and WILL linebacker. He takes accurate first steps and shows excellent closing burst to arrive with force at the point of attack, creating lanes to the ball carrier for himself and for his teammates. As a physical striker with reliable breakdown skills in the open field, Lalama has been an excellent special-teams player with Manitoba as well. Lalama, who was experience long-snapping, should be a respectable special-teams player in this league.

Gauthier is your traditional, throwback middle linebacker that plays simply off instincts and doesn’t need to be an athletic, quick player. He reads plays well, flows to the ball and meets runners in the hole with authority. He rarely over-pursues and consistently beats oncoming blockers with a plethora of different moves. His pass-coverage skills remain a question, but Gauthier’s 4.6-second 40-yard dash time may have satisfied scouts.

Parrish, a former San Jose State commit, looked good at the combine, where he weighed in 10 pounds less than expected. That’s certainly not a bad thing, especially considering how good he looked at the combine. Parrish was smooth in coverage and very tough to block in one-on-ones, impressing scouts after a disappointing senior campaign.

Barnett projects more as a safety in the CFL, but don’t rule out the possibilities of him playing in the box, too. Barnett plays very fast – he ran a 4.85 40-yard dash for reference – and is surprisingly good at winning battles at the point of attack, shedding blocks with his hands. He understands his landmarks when he drops into coverage and reads the quarterbacks eyes, all the while scanning the middle for crossers. With consistent tackling abilities, Barnett projects quite well as a special-teams player in the CFL.

Jackson tested very well at the Toronto regional Combine, clocking a great 4.75 40-yard dash and 4.37 3-cone time for a stocky, 5-foot-10 and 223-pound middle linebacker. Coming from a great program in Sam Houston State, Jackson was poised for a breakout senior campaign until injuries limited him to one game in 2015. He lacks college game film, however, and I’m not sure if his combine performance really satisfied scouts.

Laurin is an athletic linebacker with quite a few technical issues, but he makes for a potential special-teams contributor. While he does have good size and speed, he’s not aggressive enough at the point of attack, and needs to continue to work on angles and tackling.

Newton has been the fantastic pass-coverage linebacker in his tenure with Guelph that scouts so desperately covet. Newton isn’t built very big and doesn’t play with much raw strength on the football field, projecting more as a safety in my eyes, similarly to Graig Newman. Newton, who struggles to shed blocks with his hands or with power, doesn’t consistently meet at the point of attack with force, as a linebacker should.

Ogbongbemiba tested well in the vertical and the shuttle at the Edmonton regional, earning himself an invite to the National Combine. A productive, smash-mouth Mike LB with Calgary, Ogbongbemiba recorded 23 tackles, 1 sack and 1 INT in six games last season.