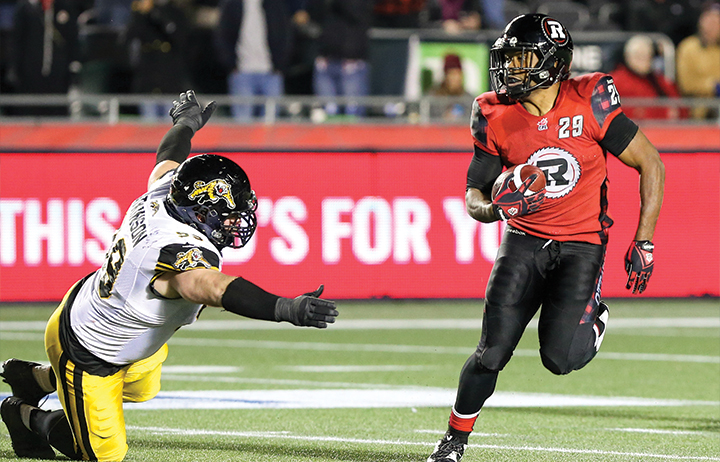 Every season sees a new wave of unknown, rookie players burst onto the scene and become stars. But every season, there’s also a wave of players with limited experience under their belt that breakout in a larger role further into their career.

Although the fourth-overall selection in last year’s draft isn’t penciled in as a starter, as a result of Ackie’s versatility, he’ll likely see plenty more defensive snaps in his sophomore campaign. The Wilfred-Laurier product, who has experience at safety, linebacker and halfback, will get his chance to start sooner or later when injuries hit. If what he displayed in a preseason-esque, week 20 game against Saskatchewan holds true, Ackie shouldn’t be a liability.

Hollins, the lone returning international defensive back from last year’s Riders roster, played quite well in his rookie season despite his surroundings in Saskatchewan’s porous defensive backfield. He could excel in Chris Jones’ system with a year of CFL experience now under his belt, emerging as Saskatchewan’s best cover-man.

Appearing in three games in 2015, Cole looked promising as an edge-defender, recording two sacks and an additional tackle-for-loss. He looked especially good in the Banjo Bowl, albeit against two struggling offensive tackles, notching a sack and numerous QB pressures. The 28-year-old will have to battle several other CFL rookies in training camp to be the successor of Greg Peach – a notable battle to watch at Blue Bombers training camp.

It’s no secret that I’ve thought highly of Ottawa’s secondary before last season even kicked off, going as far as claiming they had the league’s best defensive backfield only a couple weeks into the season. To the credit of their American scouting department, Ottawa has had a crowd of international defensive backs on their roster, plugging numerous different players into the starting lineup and not missing a beat.

Sermons, a UCLA star, made his first career start at short-side cornerback in the Grey Cup, containing one of the best receivers in the league, Derel Walker, all game until a late pass interference infraction lead to the game-winning touchdown a few plays later. With Jovon Johnson now in Montreal, expect Sermons to take over the field-side corner position this upcoming season.

Although he’ll start the season returning kicks with Kendial Lawrence, Demski will see plenty of time on offense in his sophomore campaign as the Riders are expected to start two Canadian pass-catchers in Rob Bagg and the oft-injured Shamawd Chambers. The former Manitoba Bison earned time as a starter last season, proving he can be an electric player in the pro-ranks, making numerous splash plays as a rusher, receiver and returner. Expect more of that in year two.

There’s a new Chad Owens in Toronto; second-year slot-back/returner Diontae Spencer. He’s equally as shifty and could emerge as a reliable, possession receiver in year two after amassing 502 yards and 3 TDs in 10 games last season. But with Vidal Hazelton, Tori Gurley, Anthony Coombs and Kevin Elliott also being featured in Toronto’s passing attack, there’s only one football to go around. Spencer should see many reps as a punt returner.

If the Beltre can earn a starting spot out of training camp, he’s likely in for a big season. Starting defensive ends opposite of Charleston Hughes have accumulated 38 sacks over three seasons, with all three of those players – Cordarro Law, Shawn Lemon and Freddie Bishop III – earning NFL contracts. (Full credit to Scott Mitchell of the Calgary Sun for that stat). Beltre, who’s been hampered by injuries throughout his brief, two-year CFL career, has repeatedly flashed potential as an edge-rusher in limited playing time, just like the three to start opposite Charleston Hughes before him.

Like many Stampeder receivers before him, Wilson could make a huge leap in year two in an expanded role with the departure of several talented incumbents. Wilson delivered in year one when called upon, catching 20 passes for 190 yards and a TD. His finest hour, a three-catch, 26-yard outing on Labour Day, saw the 25-year-old make two clutch second-down grabs as well as a back-shoulder, fade-route touchdown catch against 6-foot-5, All-Star corner Pat Watkins, giving Calgary the lead.

Wilson, 6-foot-two, 205-pounds, could start at boundary wide receiver, field-side slot or field-side wide receiver depending on where Joe West and Bakari Grant play. Regardless, he’s expected to take build off his promising rookie campaign and produce wherever he lines up in 2016.

With HB Brandyn Thompson still unsigned – he’s likely testing the NFL market – Hightower is penciled in as a starter at boundary halfback after coming on real strong down the stretch for the REDBLACKS in 2015. He’s already proved that he has skills in man-coverage and in press on the line-of-scrimmage to excel within Ottawa’s scheme next season.

After binding his time on the practice roster, Roosevelt finally made his debut against Ottawa, catching four passes for 46 yards and a beautiful TD on a corner-route featuring a great, tip-toe catch. He went on to catch 25 passes for 488 yards and 5 TDs over 10 games, entrenching himself as a starting slot-back for the new-look Riders heading into 2016.

Durant, a steal in the 2015 draft who fell into the hands of the Stamps at nineteenth overall with most teams worried about his ability to play special-teams, earned more reps in Calgary’s offense as the season went on and didn’t look out of place. The Simon Fraser University product had 12 catches for 178 yards and three touchdowns – a 14.2 yards-per-catch average – with OC Dave Dickenson drawing up plays for the 6-foot-two, 231-pound exciting freshman on hitch screens and isolated quick-slants. Durant will likely get an opportunity to start in 2015 and show eight other CFL clubs why they were wrong to pass on him in the draft.

While I don’t think Hoffman-Ellis was quite as great last season as his gaudy tackle statistics present him to be, it was indeed only his rookie season, and the Ti-Cats’ decision to sign him, and let incumbent starter Taylor Reed hit the open market, indicates they believe the former BC Lion could take a huge step forward in year two. Hoffman-Ellis adds even more athleticism to Hamilton’s linebacker corps, and if his skill-set does translate into Hamilton’s scheme, year two could be a breakout season.

With the loss of DE Justin Capicciotti in free agency, the REDBLACKS could look to starting a fourth national offensive lineman in last year’s first overall draft pick in order to meet the required seven starting Canadians. Canadian RG Nolan MacMillan, who played much of his rookie season in 2014 at tackle, could slide out to the now-vacated right tackle position with Colin Kelly inking an NFL deal, allowing Mateas to draw in at right guard (or at centre, with Jon Gott moving to guard). Mateas now has a year of experience under his belt and has hefty expectations to meet in what could be his first year as a full-time starter in the CFL.

In five games before suffering a season-ending knee injury, Whiteside established himself as a fearsome pass-rusher with seven sacks and thirteen tackles. At full strength with a training camp under his belt, Whiteside is expected to anchor Ottawa’s defensive line, who lost three starters in free agency in DE Shawn Lemon, DE Justin Capicciotti and NT Keith Shologan.

Unless he lands an NFL deal, McEwen, the third overall pick in last year’s draft, should slide right into a starting role at centre for the Argonauts, replacing Jeff Keeping and pushing import Greg Van Roten to guard. While completing his education at the University of Calgary, McEwen had a dominant season, earning All-Canadian honors once again.

Taking over for an injured Jeremiah Johnson, Powell made an immediate impact and never relinquished the starting role. In seven regular season games, he averaged 5.9 yards-per-carry with 76 rushes for 447 yards and two TDs, while also proving himself as a receiving threat, adding on nineteen catches. Powell, 5-foot-9, 207-pounds, brings incredible versatility to Ottawa’s offense in terms of his multiple running styles, pass protection and receiving skills. Expect the REDBLACKS to feature the run game much more in 2016, fueling Powell’s true breakout season.