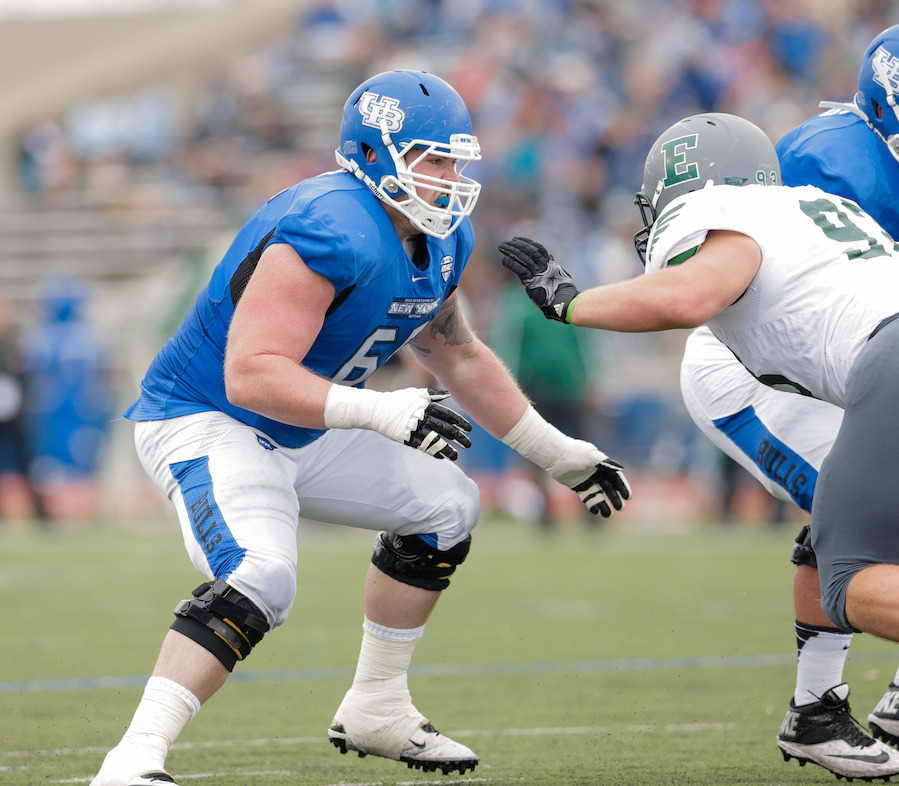 After researching almost every draft-eligible player that’ll be selected within the first four rounds of the upcoming Canadian College Draft in May, my thoughts on how the Blue Bombers will approach the draft this year have become slightly clearer.

Having selected Garrett Waggoner in the 2015 supplemental draft, the Bombers currently don’t have a 2016 first-round pick – a pick that would’ve been extremely valuable given the Bombers 5-13 record last season. Instead, they have back-to-back picks to open the second round at ninth and tenth overall, followed by selections at 19, 28, 37, 46 and 55.

I have the Bombers taking Laval right tackle Jason Lauzon-Seguin, who’d move inside to guard with the Blue & Gold, at ninth overall in my first mock draft of this year. While, admittedly, the 6-foot-4, 300-pound native of Pointe Claire, QC. is one of the very few lineman I don’t have tape on, the fact that Lauzon-Seguin only started one season after playing behind 2015 first-rounders Karl Lavoie and Danny Groulx is concerning.

If the Bombers’ brass isn’t willing to invest one of their second-round picks in Lauzon-Seguin, another option could be University of McMaster right guard Zachary Intzandt. While some may view this as a reach, Intzandt does nothing but impress me on film. He’s an athletic dude with great size, technique and a solid burst out of his stance. He’s also an effective puller, polished pass-protector and a solid run-blocker – the total package. He’s not great at anything, but more importantly, Intzandt has no glaring weaknesses. According to the intro in his highlight package, he runs a 5.17 40-yard dash, which is a fantastic number for a man of that stature. I wouldn’t be shocked if a solid combine sees Intzandt move up a lot of team’s draft ranks.

But if the Bombers don’t think highly of either, their next option would be to trade into the first round, where they can pick one of the top-tier offensive lineman before they’re gone. The logical option is Hamilton at fifth overall, and to acquire the pick, Winnipeg will likely give up one of their second-round picks – preferably the tenth overall selection – as well as a 2016 mid-round pick.

Of the top-tier, I’m guessing the Bombers would have their choice between two of St. John, Guy and Gagnon at fifth overall. All three would bring more competition in year one than any lineman the Bombers could take elsewhere in the draft.

But even if the Bombers are indeed sold on Lauzon-Seguin and Intzandt, it’s still possible they attempt to acquire Hamilton’s first-round pick. At fifth overall, the Bombers would likely be in a position to select one of the best running backs to enter the CFL draft in a long time, Mercer Timmis, out of the University of Calgary, before the Stampeders can keep him in Calgary with the sixth overall pick. Timmis could give the Bombers a great, Canadian backup running back behind the newly-signed Andrew Harris until he’s ready to take over the starting job in the future. The six-foot-one, 220-pounder is one of the best Dinos in history, and some pundits have gone as far as calling Timmis the next Jon Cornish. You can read my scouting report on Timmis here.

If the Bombers send the tenth-overall pick as part of a package for Hamilton’s 1st-rounder and draft Timmis, GM Kyle Walters will undoubtedly take the best offensive lineman available with his lone remaining second-rounder. But if the Bombers choose not to trade into the first round and stick with back-to-back picks to open the second round, presuming the ninth-overall selection is an offensive lineman, they have some options at tenth overall.

University of Manitoba defensive tackle David Onyemata, the consensus top prospect in the 2016 class, is someone who I really think the Bombers will consider. While Onyemata will surely sign a UDFA contract with an NFL team, there’s always a chance that he’s cut in mini-camp or training camp, immediately returning to Winnipeg thereafter to collect game film for another attempt at the NFL when his rookie deal expires. Although the Bombers can afford to wait a year or two for Onyemata, if necessary, with Jake Thomas and recently-signed Keith Shologan rotating at nose-tackle.

Sticking along the defensive line, expect the Bombers to also take a good, hard look at Virginia pass-rusher Trent Corney as a player worth selecting with one of their second-round picks. Corney, a high-motor, bull-rush book-end who reminds me of Greg Peach, would add more depth behind incumbent national starter Jamal Westerman.

Given how thin this year’s draft class is – especially compared to last year’s, which was an anomaly – it’d be wise for the Bombers acquire Hamilton’s first-round pick and select Buffalo right guard Dillon Guy – assuming the team’s comfortable with his injury history – or Laval right guard Philippe Gagnon. I’d be okay with losing a pair of 2016 mid-round picks of a draft class that doesn’t appear to be super deep if it allows the Bombers to shore up the offensive line for the future with a first-round pick. Of course, if the Bombers also think Zach Intzandt could be a steal in the second-round like I do, they’d be best to not trade, select Intzandt, and keep all their draft picks.

They have many options, evidently, for the upcoming CFL draft, but a lot can change by the time May rolls around. It’s all just preliminary thoughts for now.