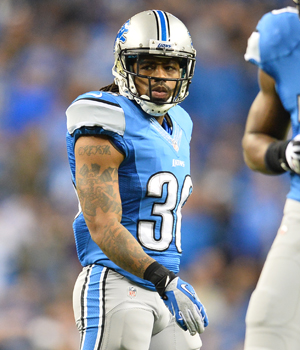 Green is a former sixth-round pick of the Detroit Lions, spending two seasons in the Motor City before being cut in early 2014. In 2015 he participated in off-season workouts in April with the Buffalo Bills and a month in training camp with the Arizona Cardinals.

Positives: Athletic cornerback who’s displayed a variety of skill in his game. Plays with an aggressive nature, works hard to defend the run and makes a lot of tackles up the field. Keeps the action in front of him, gets a nice jump on the throw and displays a good move to the pass. Can burst to the ball out of his plant and works to make plays. Solid return specialist who sets up blocks, finds the running lanes and quickly gets through them.

Negatives: Does not consistently play to his 40 time or show a burst. Loses opponents, blows assignments and does a lot of trailing down the field. Struggles staying with receivers out of breaks.

Sports Illustrated’s scouting report of Green coming out of college seemed to be spot on based on his experience in the NFL. He showed poor awareness in zone, took a lot of holding penalties and didn’t at least become the decent man-on-man corner that he had the potential/was projected to be. That all doesn’t sound good for his chances of making it in the CFL.

The six-foot, 185-pound Green will likely compete at boundary halfback and strong-side linebacker for the Bombers. He was a strong tackler with New Mexico State, but whether or not he can regain his college form remains to be seen.

Winnipeg’s other new coup, Lawrence Martin, is far more of a mystery. He’s got great size at six-foot-three, 320-pounds and actually played tight end and fullback at a whopping 316 pounds in his second and final year of college football with South Florida; it’s safe to say Martin doesn’t lack athleticism. He had three career starts as an offensive lineman at South Florida.

Lawrence has since played in the Arena League with the Tampa Bay Storm. He’ll compete for the right tackle position with Jace Daniels and Jamarcus Hardrick.